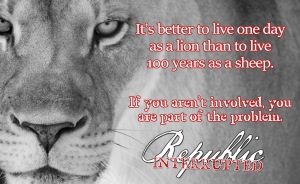 “They” are gonna come take our guns! “They” are watching all of us! “They” control the government. “They” think we’re stupid. “They” are too powerful. “They” want to take away our rights.

“They” are the 537 elected plus 12 appointed-for-life asses polishing chairs in DC, and the thousands of elected and appointed asses polishing chairs in the state governments. And “They” are the seven-plus million federal and state employees who work for them, and the countless thousands of county and city officials and the people who work for them. “They” are your local school board and your Home Owners’ Association, and the rent-a-cop at the mall.

“They” are anyone who has taken the power to tell us “You can’t do that” and/or “You must do this”, and can lock you up or even shoot you if you fail to comply.

“They” are also the same ones we mean when we say “Somebody”, as in “Somebody should do something about <insert topic here>.”

Ooops! Ain’t that just a kick in the head? We’re real good about crying over losing our rights, and the big bad “They” stealing from us but “They” are the first ones we invoke when we don’t like something that’s going on.

You don’t get it both ways, people. No cake and eat it too available here. If you want “They” to stop trampling all over your rights, you’ve got to let go of “Somebody” too. And you know how to do that – but you won’t do it. You haven’t done it yet, I don’t think you’ll do it now. To let go of “Somebody” and to kick “They” out, you’re going to have to do things yourself, for yourself.

That’s the price of having a nanny state, y’all. If you want the government hand-outs and the government protection, and government telling other people what they can or can’t do, then you have to accept the government control of your life, too. You can’t have it any other way.

If you want liberty, if you want freedom, then you have to pay for it with actual work. With being involved in your own damned destiny. Get up off your lazy ass and go find out what’s going on at your school board meeting, at your city council meeting. Go meet your state representative. Find out if he’s really as big an asshole as you think he is, and let him know you don’t trust him and have your eye on him.

Vote, fergawdsake! If you don’t want to take the time to do your homework and figure out WHO or WHAT to vote for, I’ll give you the short course in exercising your civic duty. The incumbent is usually listed first – so vote for whoever is listed second, on anything else, vote ‘no’.

Oh, you don’t vote because if you register they’ll call you for jury duty? First off, that’s part of getting up off your lazy ass and getting involved. But, if you really want out of jury duty, it’s easy: show up the first day with a Fully Informed Jury Association pamphlet in hand. They’ll send you home so fast it’ll make you dizzy.

If you aren’t willing to get involved, to live some other way than as a sheep, then just settle into your recliner with the remote control holster and beer can holder, crank up Duck Dynasty and the football game, and accept the fact that you’re no better than all the welfare mooches you’re always griping about.

I’m just totally fed up with all of you.

One thought on “Who is this “They” everyone keeps talking about?”