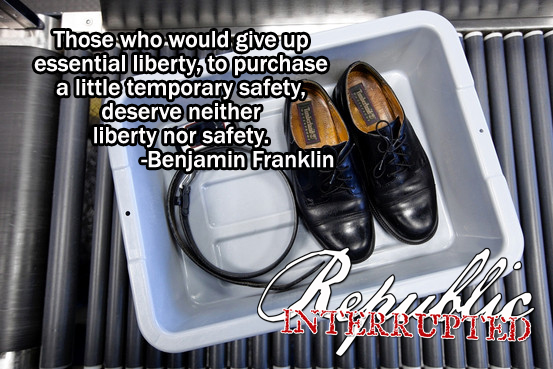 You know about the Constitution, right? That document written all those years ago, when our country was just a babe, meant to enumerate and protect the rights we were all born with? Well, the Judge’s second question was, “What if the Constitution no longer applied?”

The thought alone should terrify anyone who knows anything about the Constitution. But what if I were to tell you that the Constitution has not applied for years now? Decades even. What would you say then?

Let me give you an example. You all know what happened on September 11, 2001. But what happened after that was, in fact, an ever bigger tragedy. I know, I know. More than 3000 people lost their lives that day. What could be worse than that? It was a terrible thing. I agree completely. Don’t yell at me just yet.

Less than a week after the attack, bills were introduced in Congress designed to combat terrorism. Those bills morphed into the Uniting and Strengthening America by Providing Appropriate Tools Required to Intercept and Obstruct Terrorism (USA PATRIOT ACT) Act of 2001. It should have been called the “Let’s gut the Constitution because a bunch of crazy people attacked us” Act, but I digress.

Moving on. Let me give you the shotgun version of what the “Patriot Act” accomplished. Listen up.

“To assist in terror investigation”, the “Patriot Act” allows for:

Well, actually, no it doesn’t. I could go on and list more, but I think you get the idea. If you would like to read further, you can always go here: http://www.congress.gov/bill/107th-congress/house-bill/3162.

My point here is that the Constitution really doesn’t apply any more. Sure, we can moan and groan and say they are violating our rights, but, seriously, who is there to stop them? The government decided, long ago, that they controlled what and which “rights” they wanted to let us have, and when they care to let us have them. The rights our status as human beings gave us, and the framers of our government tried to protect for us, are now only privileges, dispensed by the autocracy at their convenience, revoked at their whim.

One thought on “This is a Biggie.”