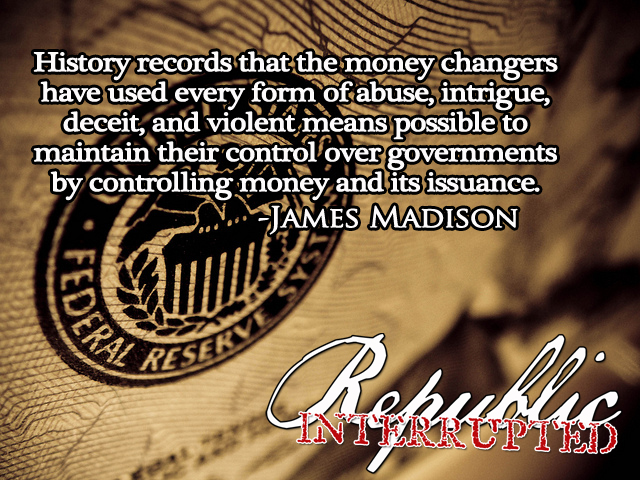 See, here’s the long and the short of it. I’ve used the word “fiat” a few times in previous articles. We need to talk about that some more, because it fits in with everything else we’ve discussed. In fact, it’s really the heart of everything else.

Federal Reserve Notes, like that dollar bill in your pocket, are “fiat” currency. They have nothing of value behind them. They don’t represent a dollar’s worth of any real thing, like gold or silver. They’re “notes”. They’re commonly referred to as FRNs.

The only way fiat currency can exist is if the people (that’s us, you and me) are forced, at gunpoint, to use it. The most important way D.C. forces us to use FRNs is to demand we use them to pay our mandatory income taxes. Here’s an experiment for you: Next year, come April 15th, saunter into your local IRS office and offer them a few bushels of new string beans out of your garden as payment on your taxes. See how far that gets you. Or maybe you just got back from your annual European vacation and still have some Swiss francs you’d like to get rid of. Try paying your taxes with them. Go ahead, I’ll wait. Good luck with that.

The sneaky way they get around giving most of us a chance to think about this is the W4; the “Employee’s Withholding Allowance Certificate”. By stealing it from you a little at a time – in FRNs – you don’t get sticker shock come April. Also, since most people are deathly afraid of the IRS, we tend to over-pay on that W4, so we have a “refund” due at the end of year. And we get paid in……FRNs.

We cannot escape using fiat FRNs (okay, that’s redundant. I won’t do it again.) because every interaction we have with D.C. requires us to use them. Taxes, of course, license fees, permits, services, anything that we have to buy from them has to be paid for in FRNs. And they only pay out in FRNs. Welfare of any description, Social Security checks, government payroll, contracts with businesses, all of it. Anything in or out of D.C. has to be FRNs. So that means that everybody – you, me, the grocery store, your employer, even your paperboy (do we still have paperboys?) has to collect FRNs so they can do their business with D.C.

We’re just forced, literally at gun point, to use it. Hell, we can’t even barter amongst ourselves unless we declare the values of the bartered items in – you got it – FRNs.

That money belongs to a private central bank. Every green piece of paper in your pocket is the property of the banks behind the Federal Reserve. Every digital 1 and 0 in your bank account is the property of the banks behind the Federal Reserve. You have temporary custody, but it belongs to the Fed. That’s because every one of them, every bill, every byte, is your copy of an IOU, a loan, made by the Fed to “our” government. Add them all up, all the pockets, all the piggy banks, the penny jars, the bank accounts, the loan balances, all of the little pieces (and the big pieces, like the trillions of dollars “our” government gives to other countries) — and they exactly equal the national debt. They ARE the national debt. That dollar bill in your pocket is a certificate of debt. Our debt. Your debt. My debt. Our children’s debt.

Debt created for us, without our consent, by Congress.

Debt owed to a cartel, an international corporation of bankers, who do business with “our” government via a storefront named The Federal Reserve System. We don’t even know who those bankers are. I’m not sure anyone in Congress, or in the President’s Treasury Department know who they are. We have a pretty good idea who some of them might be, but not every one of them. The storefront, the Federal Reserve, shields them, hides them, protects them from view.

This was all arranged back in 1913. (Funny how we keep going back to that year, isn’t it?) The 16th Amendment, authorizing a direct income tax, superseded the two articles of the Constitution expressly forbidding this kind of taxation. It was absolutely necessary that Congress control your taxes directly, instead of having to deal with the States as go-betweens. Otherwise they wouldn’t have been able to force us to use FRNs.

Hand in glove with the 16thA, the 17thA was ratified a few weeks later, taking away the States power in D.C. (we talked about that in our last article). Then later that year, with Senators now clamoring for reelection donations they had never needed before, Congress passed the Federal Reserve Act. The act set up the structure of exactly how Congress and the bank cartel would do business, and delegated Congress’ Constitutional duty to issue and control our currency to the new central bank owned by the cartel. And the deal was done.

Rereading that last bit, I realize that I just summed up the core of “our” government’s greatest betrayal of us all in just two short paragraphs.

If you aren’t pissed yet, I don’t know what else to tell you.

I can though, very, very strongly, urge you to read G. Edward Griffin’s The Creature from Jekyll Island. You may not agree with his conclusions in the later parts of the book, but he researched the actual history of the plot behind creating the Federal Reserve so well that no one, absolutely no one, can argue the truths he uncovered. It is a fascinating read and WILL piss you off. Please, read it. Please. I’m begging you.

2 thoughts on “How to Sum up Betrayal in Two Paragraphs”