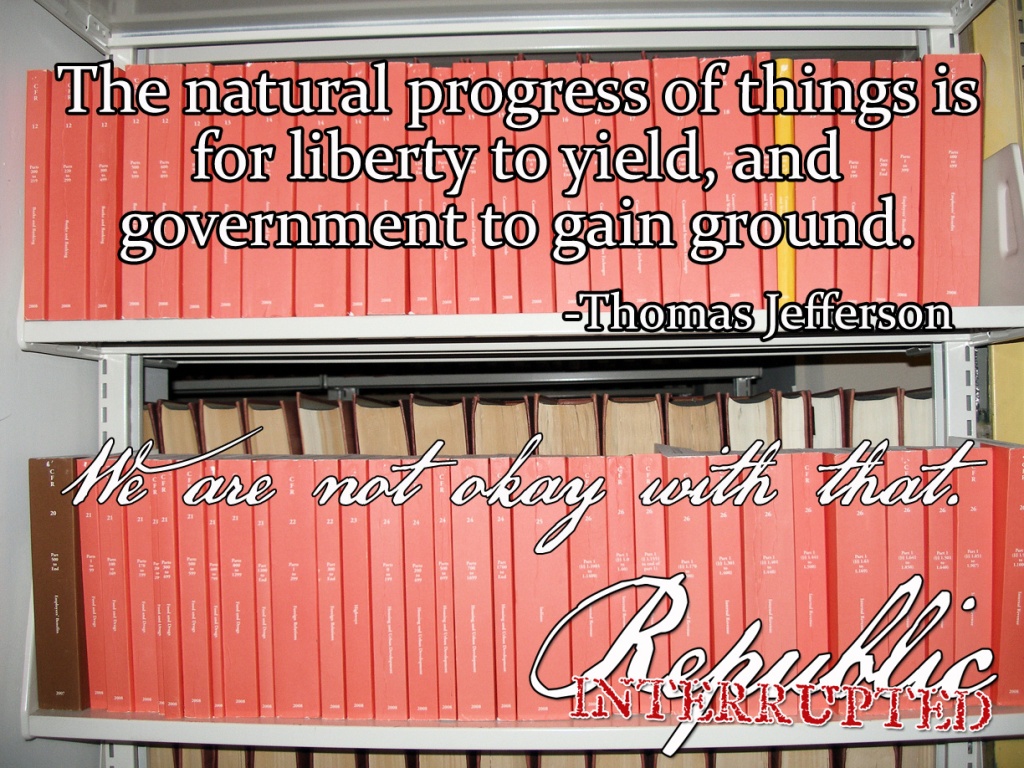 Do you know how many federal agencies there are? Does anybody know? In the research that I have done, I can’t find a list of all the government agencies. I’m not even sure the government knows how many there are.

Do you know how many pages there are in the Federal Regulations Code? I do know the answer to that. Well, kind of. From what I have been able to research, it is almost 200,000 pages long. Yes, you read that correctly. If you printed the thing out and stacked it, it would be taller than a three story building. Do you even think for a moment that they even know what it says?

In our continuing coverage of Judge Andrew Napolitano’s five minutes worth of questions, we are now at questions number three and four. “What if the whole purpose of the Constitution was to limit the government?” “What if Congress’ enumerated powers in the Constitution no longer limited Congress but were used as a justification to extend Congress’s authority over every realm of human life?”

Let me see… The Founding Fathers were so adamant about protecting the people from their government that they wrote the Constitution, and specifically limited the roles of that same government. They believed that the more government that existed, the less liberty the people would enjoy.

Today, we have regulations that tell us what light bulbs we can and can’t buy, how much water our showers are allowed to sprinkle over our heads, what tests our children take in school, what licenses you have to have to be just about anything and… well, you get the idea. There is no part of our personal lives that is not affected by some kind of regulation. It’s like a cancer that has been caught in the late stages. It has spread and spread to the point that there is nothing we can do to stop it. Surgery, at this point, is not an option. Just like cancer cells are immortal, so is this invasion of bureaucracy. The only thing left to do is to keep the patient comfortable until her time comes.

How did this happen? How did we go from a nation based on liberty to living under this behemoth of a government? You would think that there is some long drawn out story about it all. But sadly, there isn’t. Of course there are exceptions, but if you just want to know, then follow the money. Do you really think that Congress just up and decided one day to ban incandescent light bulbs? Do you really think that they just decided that incandescent light bulb was a energy sucking monster and must be done away with? If you believe that, then you and I have nothing to talk about. Instead, let’s imagine that the corporations who made the incandescent light bulb saw that they could make much more money producing and selling LED light bulbs, but couldn’t get people to buy them because they were so much more expensive. Let’s imagine that they then went to Congress and said, “Psst. We need you outlaw incandescent light bulbs for us. Here is some money.” If you believe that, then I see a great future for our friendship. Don’t just take my word for it. Please, do your own research.

One thought on “Size Does Matter; Just Ask Uncle Sam”